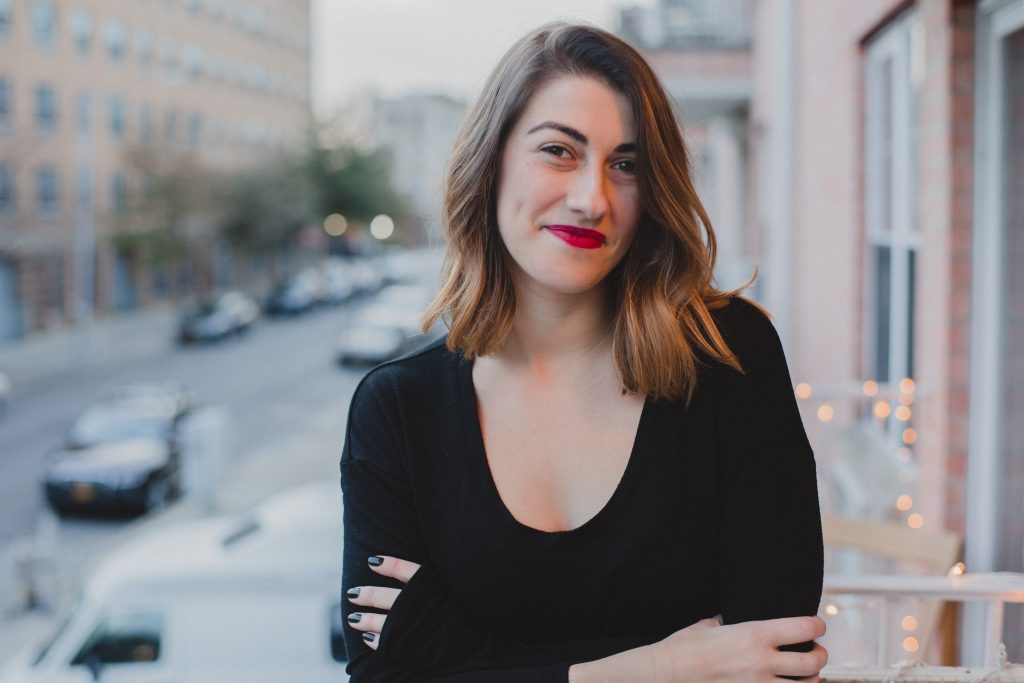 I started at the 14th Street Y as a temp for Shira’s Executive Assistant. It was a two week gig, but now I’ve been here for two years. Now I work in Marketing. I’ve gone through a couple different jobs here. I had lived across the street for about 4 years in college and had never walked into the building until I started working here.

My first gala is my favorite memory. It was so interesting to see the way the community came together, and how the theater transformed, and how much it’s grown since that gala at the Theater, then at Angel Orensanz last year.

The most meaningful moment for me was after the election. We were all sitting in Shira’s office and it was kind of the first moment I got to know my coworkers beyond the typical conversations you have with each other. That was a moment when I felt like we all let our guards down and really started to find community within one another. For me, that was really important. It had been a really intense year for me, in a lot of ways, and being able to be that vulnerable at work was amazing.

I love being part of the marketing team and being able to bring a voice to shows in our theater that a lot of people wouldn’t otherwise know about. The way that East Village theater can really grow and change is really exciting. Theater and making art, in general, is something that I’m really passionate about. I love bringing shows to life, and the way that each show is different and can tell a story.

My parents took me to see Beauty & the Beast when I was three. I was always a diva and made people watch me perform when I was a kid. I remember sitting at that theater in Boston and knowing that I wanted to be part of that world. I also danced my whole life, before acting or singing. It’s been cool to be a part of that dance world again as we’re producing more dance in the theater at the Y. Seeing the way that dance is still a part of me is really cool.

I think community are the people who lift you up, but also the people that you lift up. It’s a network and a two-way street when you’re able to be there for people and also know that you have this group of people to lean on and really rely on in those moments when you thought you didn’t have someone. I think that has been a really amazing part of the Y. Seeing the way that my coworkers lift each other up, and seeing the relationship between coworkers and staff has been really beautiful.

I think that the 14th Street Y has been a home base for a lot of us, especially the younger staff, as we’re growing and changing in our careers and our lives. I think about the first day that I walked through the doors–I think I’m a totally different person from that day until now. I’ve learned about my goals and what I want, from bad days to good days, I’ve learned things that I want to do as I grow in my career and as a person. The way that I’ve seen people treat each other here is really amazing. Knowing that–even in a big city–you can have something that really feels like home, even if it’s Carmen giving you cheese and wine after a bad day, or knowing that you can talk to a coworker about something personal that’s going on, or just getting really great life advice or ideas about your career as you’re growing and changing. I think it’s a really special place, and that’s something I would never know from just walking by and seeing people working out in the window. I used to walk by and wonder why people were doing like 80s step routines and that was all I thought the Y was–I think it’s this magical little place, and you wouldn’t really know that until you walk in.

Starting as Shira’s assistant was really interesting, because I was raised super Catholic. I was really nervous about what my ignorance to the Jewish values would mean for me at the Y. I was really unsure of how I would relate to that, or if I would be able to find a way to feel at home here. It’s been really interesting, especially in my role now and how I’ve worked so closely with DJL and LABA, and the way that the different Jewish sensibilities impact me as a person now. It’s really about just being a good person and being there for other people. The idea of Shabbat and slowing down on a Saturday has really resonated with me. Taking time to be with family and friends, and just having that moment is special.

The Healing Power of the Creative Arts